Looking for a great day outside of Rome? Visit Cerveteri, were the Etruscan civilization lived more than 3000 years ago. Look at the tombs and treasures they found and end the day with a delicious wine tasting and lunch. Curious? Read about my experience here. 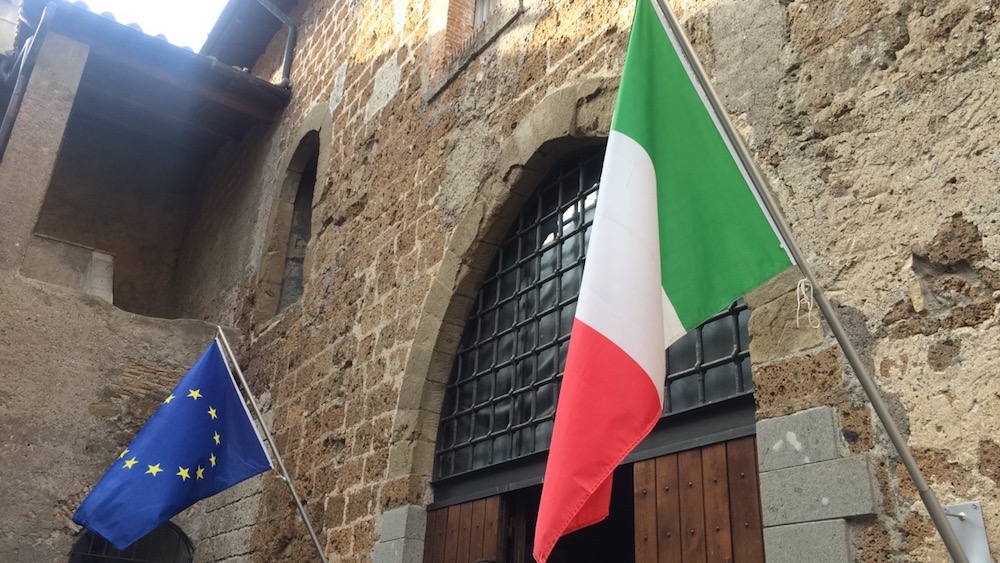 I arrived at the meeting place and the tour guide was already there waiting for me and some others. He called the driver of our bus that would take us to Cerveteri and the bus arrived within a couple of minutes. The total ride was about one hour and it was beautiful to see the greenery outside Rome. Our tour leader Davide is a friendly young men who organised this trip perfectly. He speaks really good English and was able to answer all of our questions. He was really interested and asked questions like what we had seen in Rome so far. In the end he even gave us some tips and advice on things not to mis in Rome.

When we arrived at Cerveteri our tour guide Isa was waiting for us at the Museo di Cerveteri where she gives us a tour and tells us a lot of information on how the civilisation is originated and how they evolved through the years. After the museum we walked around the Necropoli and went inside a couple of tombs. Isa is a really good guide who can keep you interested during the whole duration of the tour. Before I went on this trip I didn’t know much about this civilization of ancient Italy at all. I learned that the Etruscan civilization was a powerful and wealthy population of ancient Italy and they lived in between Tuscany, western Umbria and northern Lazio. The civilisation had their own language and endured from before the time of the earliest Etruscan inscriptions (c. 700BC) until its assimilation int the Roman republic, beginning in the late 4th century BC with the Roman-Etruscan wars. 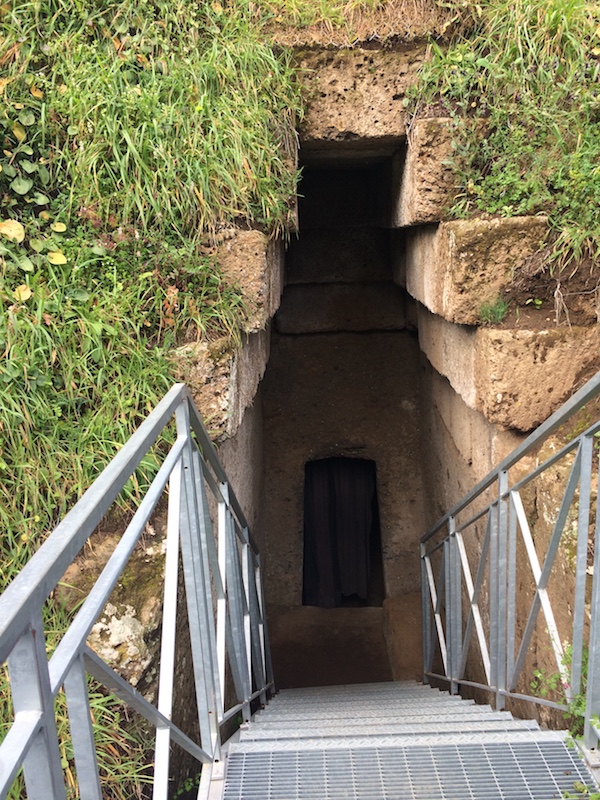 One of the entries of the old tombs.

In the city Cerveteri, just one hour drive from Rome you’ll find the Necropoli della Banditaccia, declared UNESCO world heritage of Humanity. The necropolis consists mostly of burial mounds or tumuli that have been carved out of soft tuff. The tombs usually consist of several rooms with beds, on which the dead were buried. The bed with a triangle at the beginning of the bed suggest that there was a woman lying there. When there is no symbol its most likely that the place was reserved for a man. The most famous tomb is the Tomb of the Reliefs, in which the walls and pillars are decorated with painted stucco reliefs, representing weapons, kitchen utensils, hunting horns, Cerberus and much more. Many things that they have found from the tombs from Cerveteri can now be seen in the Etruscan museum Villa Giulia in Rome. One of the most famous things they found is the ‘Sarcophagus of the husbands’. 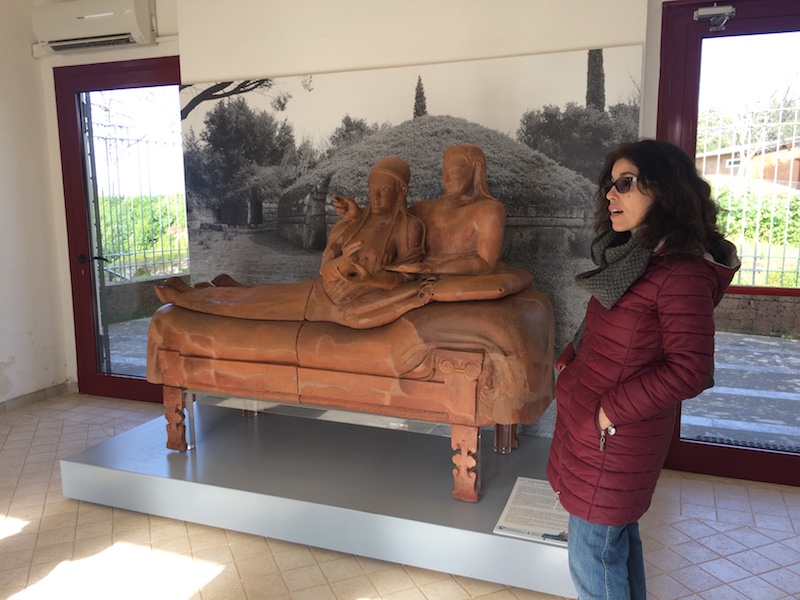 The tour gide Isa knows so much about this!

Since a couple of years the Necropoli have used new techniques such as a 3D cinema inside a couple of the tombs. By watching the video you’ll see you the Etruscan people have lived here, how they builded the tombs and for a moment it seems you are back in time. Did you even know that some words in the Italian language are from the Etruscan? For example the word auguri, that Italian use to congratulate you. In the Etruscan time auguri meant that you could tell the future in the sky. This could mean something good or something bad, but the Italians only use the word in a positive way now.

After the tour we said goodbye to Isa and went to Castello di Torre in Pietra. Salesmanager Christian, originally from Copenhagen, was already waiting for us. He told us about the history of the winery and the different grapes he uses to make the wines. Did you know that they produce around 250.000 bottles a year?! We’re sitting down at a table for the wine tasting. I’ll see fresh bread, salami, mortadella, parmaham and cheeses. First we try a white wine, the Vermentino, that immediately becomes my favourite. We also try another dry white wine, and two red ones. All really good and tasteful, but eventually i’m going home with two bottles of the Vermentino. It was really nice to know more about the wines in this region and Christian is a great wine specialist. 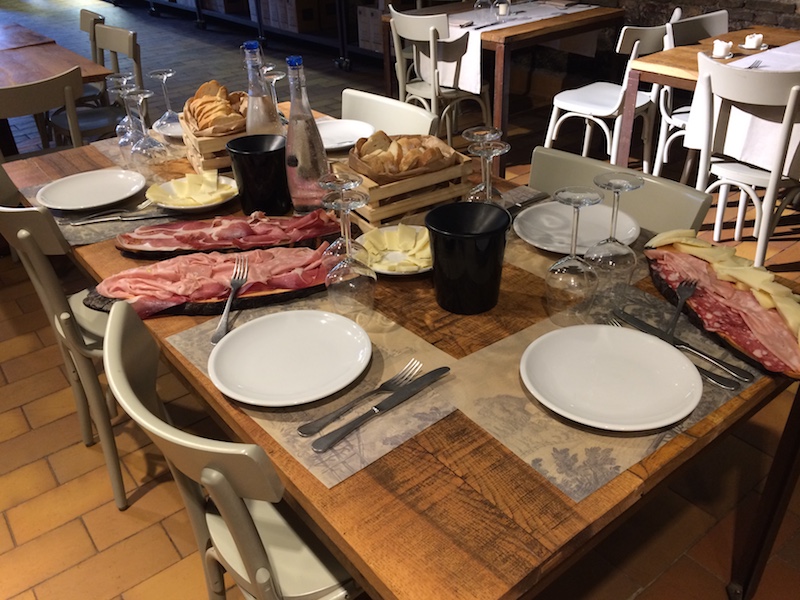 Wine tasting with some delicious food! 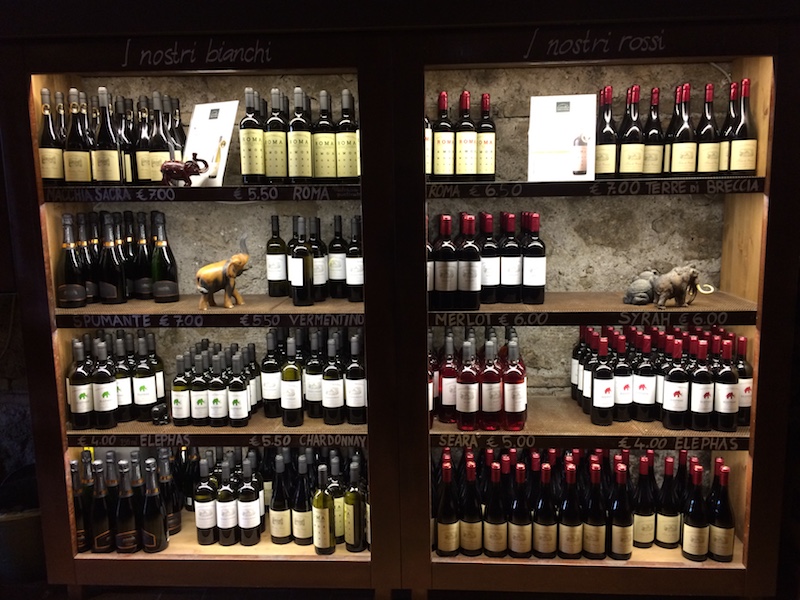 Winebottles at Torre in Pietra

For a moment I thought that this day trip had come to an end but then I forgot that we were also getting lunch at La Viola, the restaurant that is next to the Castelli di Torre in Pietra. When we walked in it was very busy with mostly locals who were having their Sunday lunch here. We ordered a bottle of one of the wines we just tasted and I had an amazing Italian dish, pappardelle with some kind of sausage in tomato sauce. And of course we ended the lunch with a dolci, for me the tiramisu which was perfect! Unfortunately all good things come to an end, and it started to rain when we drove back to the centre.

I had an amazing day on this tour and enjoyed every part of it. I would really recommend it when you’re interested in the history of the region and love the Italian culture and food as well. If you would like to have more information about this tour please don’t hesitate to contact me.

Tenzij anders vermeld zijn de foto's op deze site gemaakt door Romée van Klaveren & eigendom van Your Italian Travel Guide. Gebruik van tekst of foto's zonder toestemming van (en verwijzing naar) YourItalianTravelGuide.com is verboden. Alle rechten voorbehouden. Copyright YourItalianTravelGuide.com
We use cookies on our website to give you the most relevant experience by remembering your preferences and repeat visits. By clicking “Accept All”, you consent to the use of ALL the cookies. However, you may visit "Cookie Settings" to provide a controlled consent.
Cookie SettingsAccept All
Manage consent

This website uses cookies to improve your experience while you navigate through the website. Out of these, the cookies that are categorized as necessary are stored on your browser as they are essential for the working of basic functionalities of the website. We also use third-party cookies that help us analyze and understand how you use this website. These cookies will be stored in your browser only with your consent. You also have the option to opt-out of these cookies. But opting out of some of these cookies may affect your browsing experience.
Necessary Altijd ingeschakeld
Necessary cookies are absolutely essential for the website to function properly. These cookies ensure basic functionalities and security features of the website, anonymously.
Functional
Functional cookies help to perform certain functionalities like sharing the content of the website on social media platforms, collect feedbacks, and other third-party features.
Performance
Performance cookies are used to understand and analyze the key performance indexes of the website which helps in delivering a better user experience for the visitors.
Analytics
Analytical cookies are used to understand how visitors interact with the website. These cookies help provide information on metrics the number of visitors, bounce rate, traffic source, etc.
Advertisement
Advertisement cookies are used to provide visitors with relevant ads and marketing campaigns. These cookies track visitors across websites and collect information to provide customized ads.
Others
Other uncategorized cookies are those that are being analyzed and have not been classified into a category as yet.
OPSLAAN & ACCEPTEREN