Try the best cocktails at the Peaky Blinders Bar in Rome

If you haven’t been here yet, put this place on your list! The Peaky Blinders Cocktail Bar in Rome is a one in a lifetime experience for you and your friends. Enjoy the Italian atmosphere like you are at home and try one (or more!) of their delicious and unique cocktails! 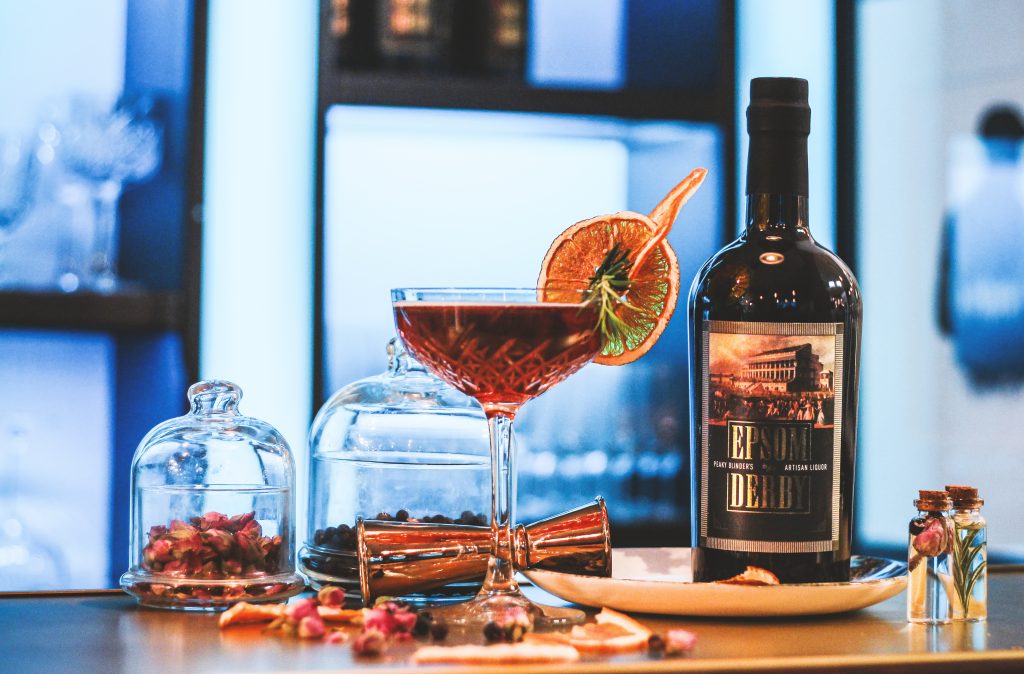 It was only recently that I walked by this lovely place and recognised the name ‘Peaky Blinders’, as the same as the famous Netflix series. Curious as I am I went inside and started talking with one of the owners Andrea. It’s a nice, small place that could even be the living room of one of your friends. There are a couple of couches and tables and chairs in old English style, with even two red chesterfields look alike couches in the back of the bar.

Andrea (31) & Igino (31) go way back together. Starting their friendship when they were only 19 years old they’ve grew up to be the entrepreneurs they are today. In 2010 they moved to London, Andrea to do his master in Human Resources Management and Igino to improve his English. They always had the idea of opening a bar in Rome and in June 2017 their dream came true. They found the perfect place for their bar, located in a side street of Corso Vittorio Emanuele in the centre of Rome. 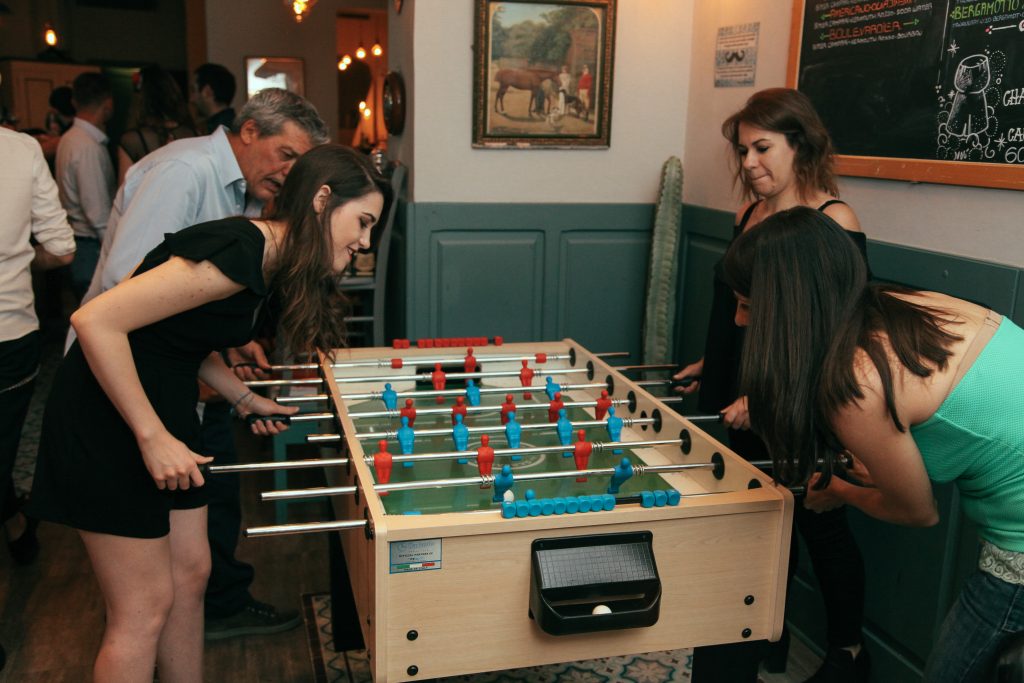 The idea of starting a bar in the old English style wasn’t based on the Netflix series Peaky Blinders at first. Andrea grew up in a family with a love for England, horse riding and old antiques. His father owned more than 3 horses and his mother has a passion for English antiques that she is currently selling at her shop in Trastevere. So, when they opened the place the name ‘Peaky Blinders’ was the most suited to their wishes. Andrea’s mother even helps with decorating the place, as you can see by the brown furniture and English paintings on the wall. Even the old couch, from the house where Andrea grew up in, fits perfectly with the rest of the furniture. Across the couch you’ll see the beautiful brown wooden bar, perfectly decorated with different bottles of glass. Behind the bar there is a light panel that can be switched into different colours and they’ve placed a couple of shelves for the many liquors they are providing.

Besides making the best cocktails you’ve ever tried they also provide something that not every cocktail bar in Rome has to offer: their own liquor named Epsom Derby. A special combination of the Italian Chinotto, orange and something familiar to Aperol. Try out their various cocktails including this delicious liquor! 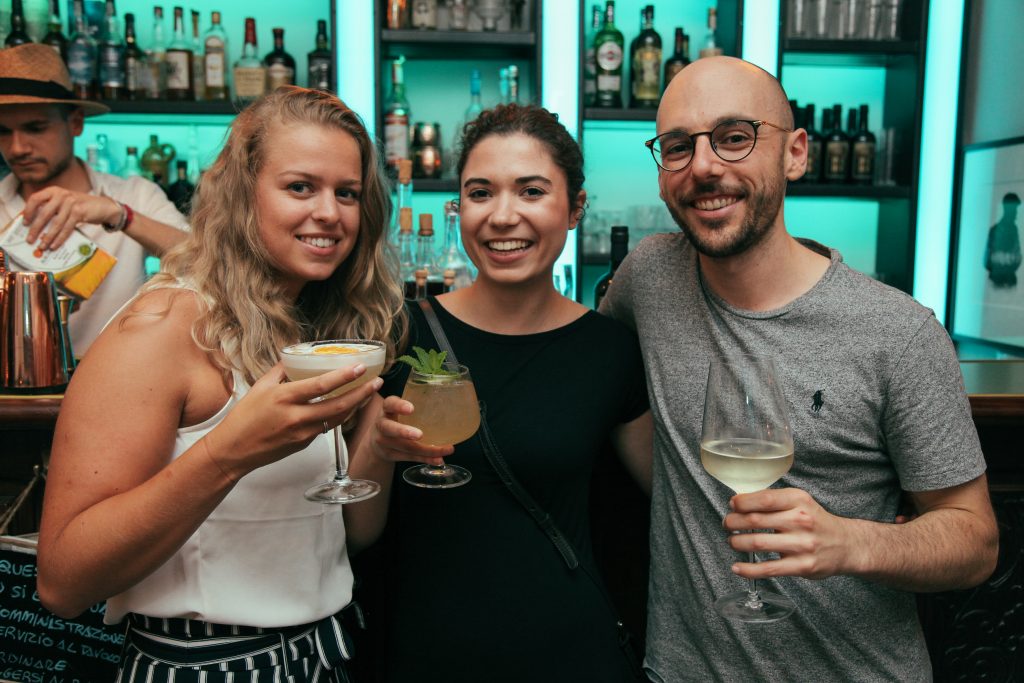 Romee, Rebecca and Joey at the one year anniversary of Peaky Blinders Bar in Rome

About the Netflix series

Peaky Blinders is a gangster family epic set in Birmingham, England in 1919, several months after the end of the First World War in November 1918. The story centres on the Peaky Blinders gang and their ambitious and highly cunning boss Tommy Shelby. The gang comes to the attention of Chief Inspector Major Chester Campbell, a detective in the Royal Irish Constabulary sent over by Winston Churchill from Belfast, where he had been sent to “clean up” the city of the Irish Republican Army (IRA), communists, gangs and common criminals. Winston Churchill charged him with suppressing disorder and uprising in Birmingham and recovering a stolen cache of arms meant to be shipped to Libya. The series concludes on 3 December 1919 – “Black Star Day”, the event where the Peaky Blinders plan to take over Billy Kimber’s betting pitches at the Worcester Races. 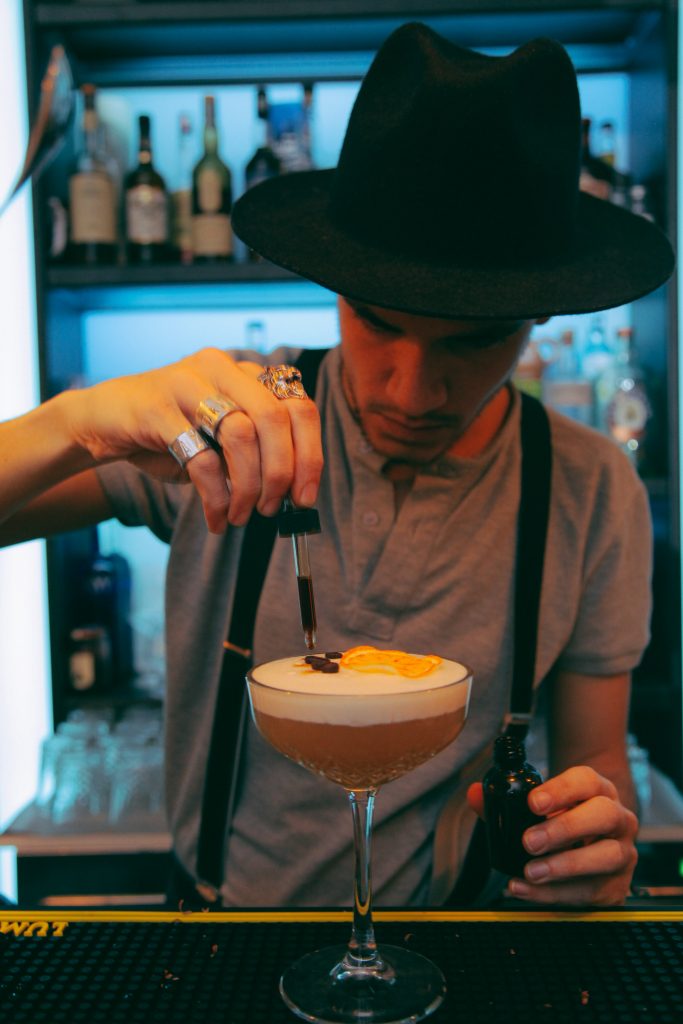 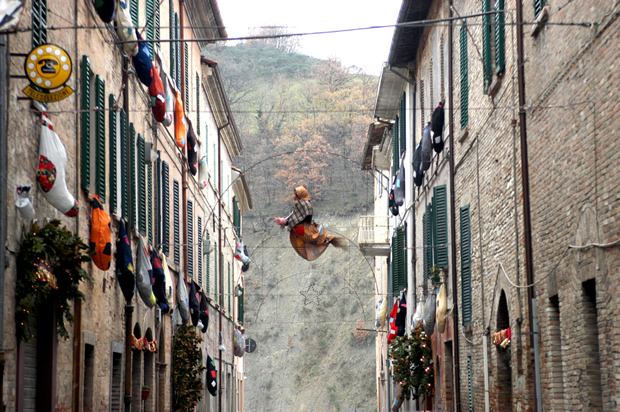 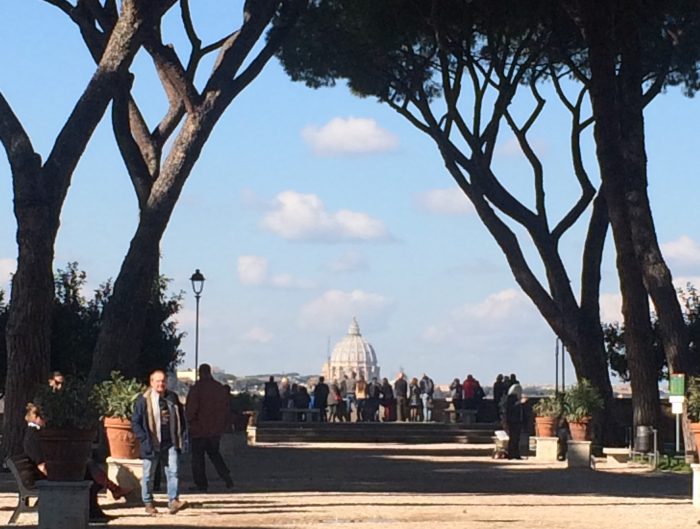 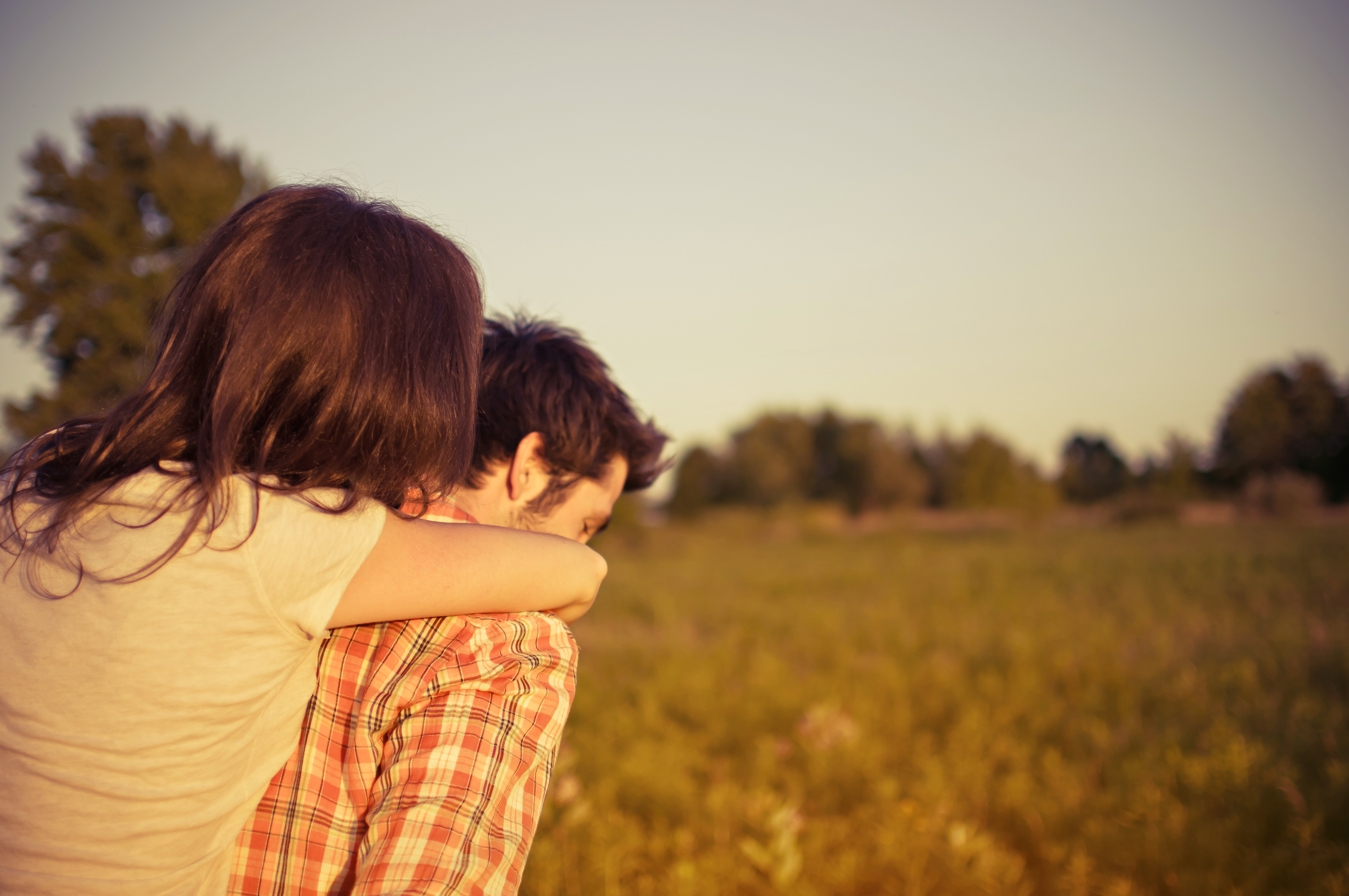 Tenzij anders vermeld zijn de foto's op deze site gemaakt door Romée van Klaveren & eigendom van Your Italian Travel Guide. Gebruik van tekst of foto's zonder toestemming van (en verwijzing naar) YourItalianTravelGuide.com is verboden. Alle rechten voorbehouden. Copyright YourItalianTravelGuide.com
We use cookies on our website to give you the most relevant experience by remembering your preferences and repeat visits. By clicking “Accept All”, you consent to the use of ALL the cookies. However, you may visit "Cookie Settings" to provide a controlled consent.
Cookie SettingsAccept All
Manage consent

This website uses cookies to improve your experience while you navigate through the website. Out of these, the cookies that are categorized as necessary are stored on your browser as they are essential for the working of basic functionalities of the website. We also use third-party cookies that help us analyze and understand how you use this website. These cookies will be stored in your browser only with your consent. You also have the option to opt-out of these cookies. But opting out of some of these cookies may affect your browsing experience.
Necessary Altijd ingeschakeld
Necessary cookies are absolutely essential for the website to function properly. These cookies ensure basic functionalities and security features of the website, anonymously.
Functional
Functional cookies help to perform certain functionalities like sharing the content of the website on social media platforms, collect feedbacks, and other third-party features.
Performance
Performance cookies are used to understand and analyze the key performance indexes of the website which helps in delivering a better user experience for the visitors.
Analytics
Analytical cookies are used to understand how visitors interact with the website. These cookies help provide information on metrics the number of visitors, bounce rate, traffic source, etc.
Advertisement
Advertisement cookies are used to provide visitors with relevant ads and marketing campaigns. These cookies track visitors across websites and collect information to provide customized ads.
Others
Other uncategorized cookies are those that are being analyzed and have not been classified into a category as yet.
OPSLAAN & ACCEPTEREN